From the Minister’s Desk: 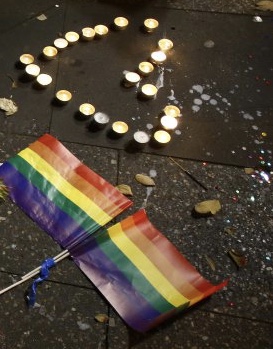 As it has become increasingly clear, the Orlando shooter had mental health challenges and was filled with rage and hate in a broad number of ways, particularly against the gay community. Whether he was troubled by being gay, may never be known, but his access to assault rifles and guns is inexcusable for it allowed him to carry out mass executions.

Too many in the conservative religious community like the Southern Baptist Convention continue their policy of exclusion and hatred, forgetting we are all children of God. They can’t even bring themselves to say the word gay when referring to Pulse, a gay club.

We gay people are objects of derision and hatred on a daily basis . While I want to stand on the side of love as my faith calls me to, I am mad as hell at such pervasive prejudice against gays, people of color and all who are perceived to be different or other.

When do the haters stand down? Apparently never!!!. Which is why those who try to live in love must never give in to hatred. This is a battle for our souls. All people of good conscience must stand up and not cower in the face of hatred. Silence is not a viable option. Take courage, the good people in our society, even as we begin to bury our dead…again!!!

My heart is with the victims and their families but also with the law enforcement officers who risked their own lives to save so many and had to witness such carnage. The psychic toll on all will last a very long time.

I will continue to strive to overcome my anger and frustration but will not be a victim.

I am GAY, OUT and PROUD.

Yours in our Shared Faith,

Visitors: 80
This entry was posted in From the Ministers Desk, News of the Fellowship. Bookmark the permalink.