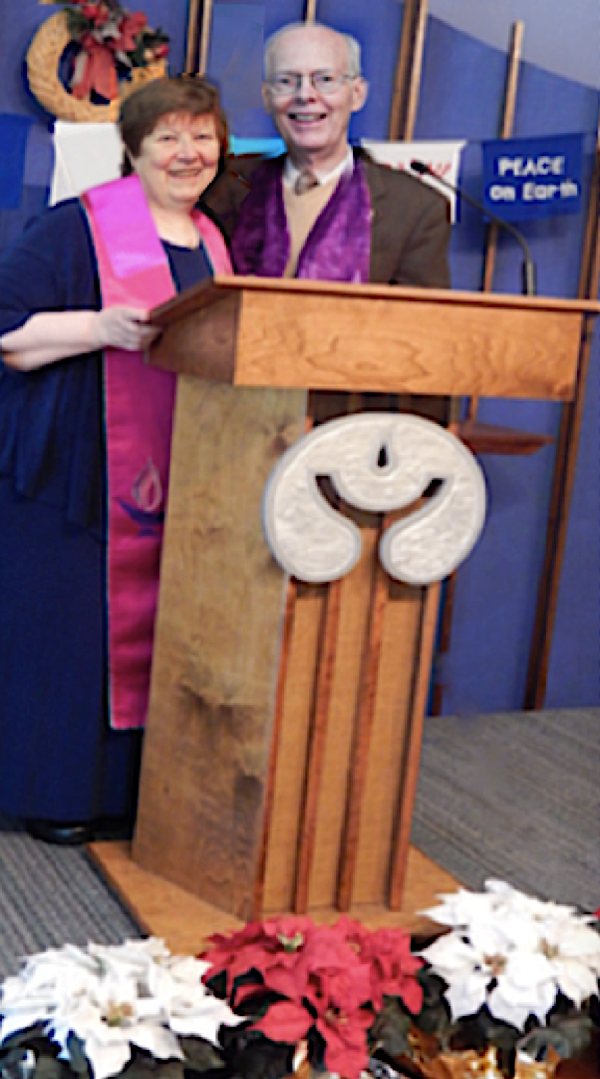 From the Ministers Desk

Greetings, it feels good to be part of the Unitarian Universalist Fellowship of Pottstown.

We are one of many clergy couples engaged in Unitarian Universalist ministry – Kerry ordained in 1995, Dave in 2003.  In the recent past, we were the co-ministers for the UU Fellowship of Fayetteville, Arkansas, from 2006 to 2011.  In 2011 we retired and returned to the Philadelphia area, rejoining the Main Line Unitarian Church in Devon (the church in which we were married in 1980).  Within a year of our return, the UU congregation in Gettysburg was in need of a new part-time minister, and we decided to delay or compromise our retirement to serve them.  After five years of two weekends a month in Gettysburg we decided it was time to retire again, but we continued to do occasional guest preaching and rites of passage and thus were with your congregation from time to time.  When you were ready for a new minister we realized that the ministerial itch was greater than the Siren call of retirement (and Pottstown is much closer to home than Gettysburg), so here we are together.  We hope the relationship has been and will continue to be fruitful, inspiring, and fulfilling for both you and for us.

By way of background, Kerry grew up in a Unitarian (pre-consolidation) family, while Dave’s family was Presbyterian (and he has a Presbyterian minister great grandfather).  Kerry has degrees from Bryn Mawr College, Temple University, Cornell University, the Wharton School, and Wesley Theological Seminary; Dave has degrees from Princeton University, the Harvard Law School, and Wesley.  We have two adult children (from Kerry’s first marriage) and four granddaughters.  Kerry has served congregations in Bowie MD, Newport News VA, Finksburg MD, Silver Spring MD, and Media PA; Dave the congregation in Cumberland MD; and the two of us together in Bordentown NJ as well as Fayetteville and Gettysburg.  Kerry’s complicated preministerial resumé includes teaching Latin at Council Rocks High School and time with Conrail and the U.S. Railway Association.  Dave’s legal career included five years at the U.S. Commission on Civil Rights and twenty five years at the Department of Justice, in the Civil Rights Division’s Voting Section.

In our pre-ministerial UU lives we were both active lay members of the UU Church of Arlington VA, and Dave had several different roles in the Joseph Priestley District.  Dave is now the vice president of our area’s chapter of the UU Ministers Association and treasurer of the UU Retired Ministers & Partners Association.  In their spare time, Kerry takes pottery classes at the Community Arts Center and occasional workshops at Pendle Hill, both in Wallingford, and Dave sings in the Wayne Oratorio Society.

What do we hope or expect to accomplish during our time with you, you may be wondering, and how long will that time be?  Good questions – we will find the answers together – answers that will undoubtedly evolve over time.  Regardless of the specifics, we trust that together we will nurture spiritual journeys, embrace diversity, celebrate community, and turn our UU values into action.